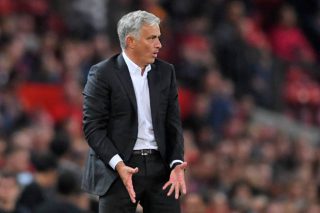 It saw Manchester United use a back four.

Friday night saw a World Cup-winner lead the team out as a captain in a competitive fixture.

Friday night felt less of a beginning of a league campaign and more about saying farewell to a summer that’s frustrated both the manager and supporters.

This situation is tough for Mourinho who has had to deal with the drip feed of players returning from World Cup action. There have been other problems too, such as Anthony Martial’s exit and non-return from the tour of the US.

Mourinho has also been striving to bring players in to bolster his squad. He knows he needs to close the gap on City. He also knows that the trophies that softened the stance of supporters following the sixth-place finish his first year in charge are now gone. Some would argue there’s a team at United ready to challenge if it could just be coached into a way of playing but finding a way of playing has been tough.

I’d hoped this pre-season may have seen a change, despite the lack of first-team personnel. A formation, a pattern, a template for success that you could see the returning stars drop into once they returned. Because in two years, Mourinho hasn’t looked close to finding one.

He spoke last season of his philosophy of looking at things match by match. How you look to beat the opponent in front of you and deal with teams one at a time in a clinical, focused way. It would explain perhaps the constant contradictions we saw in team selection the last term.

A wingback system was used in positive away victories at Watford and Arsenal before it was abandoned for the derby.

We played a diamond with Sanchez behind Lukaku and Martial in a home win against Chelsea, then never saw it again.

We played a more conventional 4-4-2 in the home win against Liverpool with Mata and Rashford either side of Lukaku and Sanchez. That quartet never started another game together.

And so we go to this summer where again we’ve seen a variety of systems used, more suiting the opponent for the next 90 minutes than working on a system that can see us through the next nine months. Now I know teams can’t get away with one system for every single game and so you need a mix, but wouldn’t it be nice if we had a default one?

The hunt for a centre-half rumbles on with no obvious end in sight at the time of writing. Toby Alderweireld from Spurs would certainly be an improvement on the defenders currently at the club. Harry Maguire? I’m not so sure. Centre-halves are hard to come by and yet there’s hardly been a clamour for the signature of a player who played in a back three which kept one clean sheet in Russia.

It’s interesting now looking back at the World Cup. How many pieces would have been written online and in print about how a young Swedish centre-half called Victor Lindelof would be the answer to United’s defensive problems if he wasn’t at the club already? Was there a better, more dynamic midfielder in the tournament than our own Paul Pogba? In what was England’s best campaign for 28 years, no player ran more than Jesse Lingard who scored one of the goals of the tournament. There are players at United already that should be able to close the gap even without another player.

Willian would fill a right-hand side that’s been left empty for too long but if he’s not to make the switch from London to Manchester is it too much to expect that one of United’s right-footed attacking wide players make the bold move to actually work on adapting their game to play right fucking wing?!

It will all unfold over the weeks and months ahead but you can’t help feel already that we may be in for another bout of Portuguese pragmatism. It’s maybe an unfair criticism, because of the genius of the man, but I don’t remember expectations being lowered in the way we’ve seen over the past couple of weeks by Sir Alex Ferguson.

In Mourinho’s first ever game in the Premier League he faced a United side that read:

That day United shouldn’t have got beat and created chances. They were expected to win by the manager and the supporters and they had a go. So much so that Mourinho (in perhaps a sign of things to come) substituted both his forwards and replaced a left winger with Ricardo Carvalho in the last minute.

The pragmatic nature of Mourinho has won him trophies everywhere and has won United cups. The game by game approach has perhaps helped United reach the quarter-finals or better in both domestic cups in his two years in charge. But it can come unstuck against the likes of Sevilla in the Champions League and over the course of a Premier League season. You can imagine the looks on some of the players if Mourinho were to say “go out and play your normal game today”.

“What’s that then?” would be a justified response.

Friday night could well see United 3-0 up inside 20 minutes and all of this will long be forgotten. Until then, we wait and wonder just how Mourinho’s Manchester United will line-up and whether there’ll be an abandoning of the game at a time approach and if he can put together a settled side that can play with style or even one style of play.

Settling for second best to City, or (horrifically) third to Liverpool would certainly see another summer of discontent at Old Trafford next pre-season.