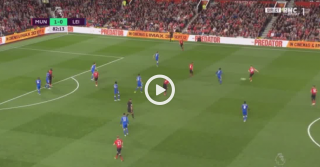 Luke Shaw has just scored his first senior goal of his career against Leicester City at Old Trafford.

Shaw receives the ball inside the box before dinking it over a Leicester defender and then slots the ball home.

A great moment for Shaw, who has had a difficult time at Manchester United under Jose Mourinho. He’s never been able to cement his place in the team but after a full pre-season tour and Ashley Young yet to reach full match fitness, he has every opportunity to make the position his own.

Jamie Carragher even gave Shaw man of the match on Sky Sports.

Moreover, United currently lead 2-0 against a Leicester City side, who have looked very good in possession. They’re going to be a good outfit this season once all of their new signings settle in.

With just minutes remaining, United should have all three points in the bag.