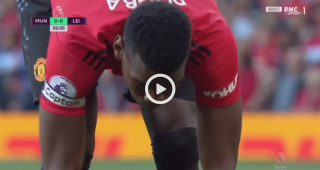 What an incredible start to the new season for Manchester United.

Alexis Sanchez had an effort on goal just two minutes into the game, which crashed off a Leciester City player’s arm. The referee had no other choice but to give the Reds a penalty.

That was followed by the first goal of the 2018/19 season when captain Paul Pogba stood up to the spot to fire home.

There has been a lot of talk about Pogba’s future, but he was handed captaincy tonight and got involved early on with some sublime passing and an opening goal.

United need to build on this lead now and make sure that the Foxes don’t find a way back into the game.

However, the early signs are good. Even after scoring the first goal, United look like a team trying to force more by putting the sword to Leicester.

Come on United! Watch the goal below.