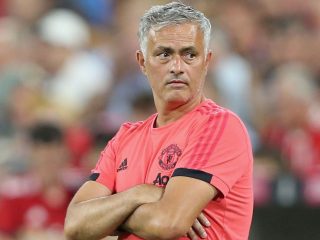 Jose Mourinho insists he has no issues with his squad.

The Reds endured a frustrating pre-season after finishing 19 points off Premier League champions Manchester City last season, while Ed Woodward and the Glazers failed to truly back the boss in the transfer market.

Last season, we also lost the FA Cup Final to Chelsea following a lacklustre display. Now questions are being asked with all of our domestic rivals – except Tottenham Hotspur – strengthening significantly in the transfer market.

That’s probably a tad exaggerated in regard to City, but they remain strong enough to win back-to-back titles. We’re still some way off that.

Mourinho has seen Lee Grant, Diogo Dalot and Fred sign for United this summer. There’s an absence of star talent in that list, although Fred looks a great player and we’re all excited about seeing what he can do once the competitive season begins, which is tonight against Leicester City.

Nevertheless, the Portuguese tactician has insisted that he’s happy with the players at his disposal and has insisted that ultimately, results on the pitch will answer their critics and those who question his relationship with the group.

“Let’s play football and by the end of November or December, you don’t need words. You will see which teams are candidates.”

With six months to settle in, there can be no excuses made for Alexis Sanchez this season. He was incredible on tour and probably one of two players to truly impress, along with Andreas Pereira.

The team will start to take shape in the coming weeks when everyone is back to full fitness. For instance, Romelu Lukaku will make a massive difference.