The new season is here and, yes, we’re still alive and kicking after a traumatic transfer window. Manchester United host Leicester City at Old Trafford, in a game that could well be a marker as to how our season will pan out.

It’s important to get off to a strong start. The Foxes made several signings and plan to finish higher than what they did last season (9th), where Claude Puel’s future looked uncertain at times. Jose Mourinho, on the other hand, will largely have to utilise the squad that finished second in the league last season.

But, let’s not make early excuses. This squad contains some excellent footballers; a world-class goalkeeper in David de Gea, a World Cup winner in Pogba, Alexis Sanchez to grind throughout attacking positions, and Romelu Lukaku leading the line. Most teams cry out for players of that calibre.

Things haven’t gone to plan over the summer. We failed to sign a top-class centre-half, the left-back position could do with strengthening and we still have nobody will real pace on the right flank to hit teams on the counter-attack.

De Gea is the first name on the team sheet and the rest of the defence should feature Matteo Darmian, Eric Bailly, Victor Lindelof (please not Phil Jones or Chris Smalling) and Luke Shaw. This is a big opportunity for Shaw, who played every game on tour and should be in better shape than Ashley Young.

Our predicted midfield will then consist of Andreas Pereira filling in for the injured Nemanja Matic, accompanied by new signing Fred and Scott McTominay.

Up front, Alexis Sanchez is likely to play the striker’s role with Juan Mata filling in behind and Marcus Rashford cutting in from the left wing. 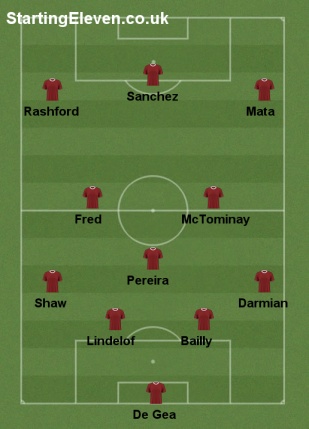 That’s a 4-3-3 formation when we have the ball, though it’s likely to switch to a 4-2-3-1 when we haven’t got possession if the pre-season matches are anything to go by.