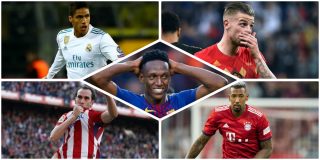 Manchester United failed to sign a single centre-half this summer, despite manager Jose Mourinho handing a list of targets to Ed Woodward back in April.

Understandably, it is an area of concern for Mourinho, who is not satisfied with the defenders he currently has at his disposal.

Since arriving at Old Trafford, the boss has spent £30 million or over on two centre-backs. Eric Bailly came from Villarreal and looked incredibly promising in his first season, which saw United win the League Cup and Europa League, whereas Victor Lindelof, formerly of Benfica, has yet to settle in.

Firstly, excuses are being made within the club to defend their failed attempts to lure a new defender to Old Trafford. Sources close to United informed Stretty News that Boateng’s injury record was a major turn off, but if that’s truly the case, why did we try to get him in the first place?

Since joining Bayern Munich from Manchester City in 2011, Boateng has missed 76 games through injuries and minor illness, such as influenza and cold. That’s a significant chunk of football to miss.

Meanwhile, Barcelona’s Yerry Mina was a potential signing until his agent demanded “ridiculous sign-on fees”. He ended up at Everton on deadline day, so there will be many watching the Toffees this season to see how the 23-year-old adapts to the Premier League after struggling in Spain following his January arrival.

❗ [LATEST NEWS] Agreement with @Everton for the transfer of Yerry Minahttps://t.co/YMyWm4thOR

Sources close to United also stated that we only spoke to Daniel Levy once and refused to meet Tottenham Hotspur’s demands because of inflation in the market. They also met with Real Madrid president Florentino Perez over breakfast in Miami to discuss Raphael Varane’s future, with a potential bid being lined up, though that never materialised.

United believe inflation in the transfer market is down to previous mega-money deals involving Neymar, Virgil van Dijk, and Kyle Walker. While people within the club may have a point stating that, it’s a wonder Paul Pogba’s name didn’t get a mention, along with the ridiculous transfer fees Mino Raiola benefited from.

With United struggling to get defenders in this summer, Stretty News understands Mourinho does not want Matteo Darmian to leave the club. He hopes the Italy international will stick around to cover right-back and left-back.