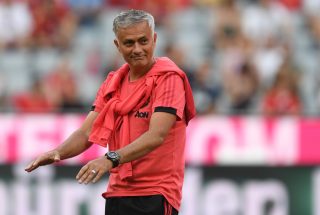 Manchester United are reportedly in discussions with Chelsea over the late signing of defender Kurt Zouma ahead of the transfer deadline.

Jose Mourinho, who speaks during his first press conference of the season at 9.30am, has been linked with a string of defenders this summer, despite already signing Eric Bailly and Victor Lindelof since taking over at Old Trafford.

Still, according to the Telegraph, the boss knows he needs to bolster his defence again ahead of the new season to have any chance of competing for the Premier League title.

Having been heavily linked with various names from around Europe, as per the report above, it appears as though Zouma could now emerge as the solution for the Reds, with L’Equipe, as backed by The Sun, claiming that the 23-year-old is the subject of talks between the two clubs.

It has also been suggested that Everton are keen on the Frenchman, but Chelsea must decide whether to its right to sell to a direct rival. They made that mistake last summer by selling Nemanja Matic to United.

Zouma has had injury problems and struggles with competition for places at Stamford Bridge, which is funny, given their poor defence.

Mourinho knows the player well from his previous spell at Chelsea and will be aware of his talent and what he can bring to the table.