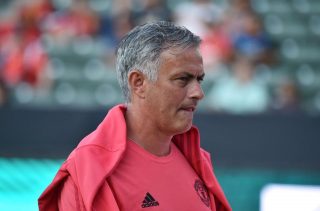 Speaking before training on Thursday morning, the United manager claimed his search for at least one more major signing was at the end.

“The information I have is no,” said Mourinho when asked if he would be adding to his squad.

“So I’m not thinking about that list I gave you, I focus on what we have.”

That list consists of a long catalogue of injured players, with goalkeeper Sergio Romero, defenders Antonio Valencia, Diogo Dalot and Marcos Rojo and midfielders Nemanja Matic and Ander Herrera all ruled out of Friday’s season opener against Leicester.

“Romero, he had a surgery after his injury before the World Cup, Valencia, he was injured in pre-season,” said Mourinho.

But it is the failure to add one more key signing that will anger Mourinho and fans alike. The boss wanted a new centre-half, but Woodward couldn’t deliver.

Mourinho is also due to talk to four of his World Cup stars after training to discover whether they are able to face Leicester, having only returned to training on Monday. That list includes Paul Pogba, Jesse Lingard, Ashley Young and Marouane Fellaini, who were all given extended breaks after their countries reached the last four of the tournament.

“They returned on Monday, trained Monday, Tuesday, Wednesday and today, so you can imagine that they are not really fit and ready but we have needs,” said the manager.

“The list that I gave you before of the injured players is an important list. And today after training I will speak with that group of players – because everybody is different physically and mentally – and see how they feel they are and to understand to think how they can help or not help.”