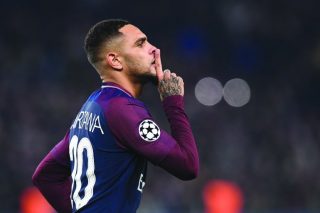 According to reports in France, Manchester United are mulling over making a transfer deadline day move for Paris Saint-Germain full-back Layvin Kurzawa.

The France star struggled for game time under Unai Emery last season and has now been linked with a move away from the Parc des Princes.

United are in for a LB on the last day? If we get Kurzawa and Alderweireld, I’ll be rooting for us to become champions.

Jose Mourinho knows he needs to bolster his defence this summer, although he is running out of time and also needs to sign a centre-half.

At 26, Kurzawa ought to be near the finished article and be a significant improvement on Ashley Young and Luke Shaw. I’ve not seen anywhere near enough of the full-back to make a well-judged assessment.

According to L’Equipe, United’s chiefs are considering making a deadline day move for the defender.

Kurzawa arrived at PSG in 2015 for €23 million from AS Monaco but featured just 20 times last season.

New boss Thomas Tuchel could offer a different way into the team for the Frenchman.