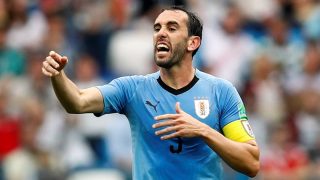 Manchester United have reached out to Atletico Madrid about signing defender Diego Godin, despite Jose Mourinho claiming earlier he was not confident about any deadline day signings.

The Uruguayan was one of the best centre-halves at the World Cup in Russia this summer and, while he is 32-years-old, reaching the latter stages of his career, Godin would be an incredible purchase if United can get it over the line.

For the likes of Eric Bailly and Victor Lindelof, especially, his experience would give the defensive duo a massive boost towards their development.

The claim regarding Godin has come from Sky Sports News, who suggest United are busy running around to find a last-minute acquisition to bolster Mourinho’s defence.

While United are right to evaluate their options, a club of this size shouldn’t be leaving transfer business to the very last minute. That tells everybody we’re desperate and unorganised, hence why Tottenham Hotspur are demanding more for Alderweireld.

Update: It appears contact between Manchester United and Atletico Madrid was made earlier this week. Now, Godin looks like he’s set to sign a new contract with the La Liga outfit.