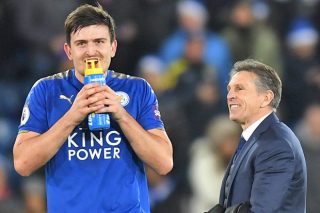 Leicester City manager Claude Puel has said it is “not possible” for Manchester United to resurrect their move for Harry Maguire but joked that the England defender will be in Manchester “for a couple of hours” tomorrow.

Puel added Maguire will be staying put at Leicester and insists the World Cup star is happy to return to training.

It looks like Maguire will be in the Leicester squad for tomorrow’s Premier League opener at Old Trafford and Puel joked: “I can confirm he is going to Manchester but only for a couple of hours.

“I am happy to keep Harry. He is our best player.

“I am a football manager and I want to keep our best players for the squad and for our season. We want to keep good ambition.

“We lost Riyad Mahrez, who was a very valuable player for us, so it was important to keep our best players and have good additions to the squad.

“For us, it is not possible. It is not serious.

“We have to prepare for this season with good possibilities.”

There’s a sense of sheer desperation at United. Ed Woodward is chasing around to get a last-minute deal done to bolster Jose Mourinho’s defence, but Puel’s stance looks certain.

Wherever he plays this season — be it Leicester or United – Maguire knows the pressure is on to replicate his form from last season and the World Cup. Considering the interest he has attracted, it’s probably fair to expect even more.

It’s hard to estimate what is going to happen at United before the transfer window shuts at 5pm.