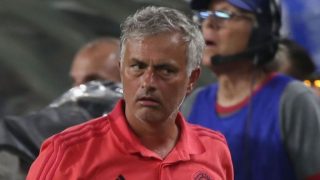 In a pre-season that posed more questions than answers, the biggest question of all continues to envelop the club ahead of Friday’s opening Premier League tie. In fact, there are two questions that appear no nearer to an answer: What’s going on with Jose Mourinho and what he is trying to achieve?

It’s true that Jose has always been given a rough ride by the media of the countries that he has managed in, and it’s also true that we all know that there’s a nauseating press agenda against Manchester United as a club. But Mourinho does not help himself. Pep Guardiola moans just as much as Jose does – but the difference between the two men is stark. Guardiola often gets his point across with a laugh, smile and often follow it up with praise – rather than blowing into Mourinho’s full-on, modern-day media raison d’etre. Shoot from the hip, blast everything and everyone in his path, alienate his players and deal with the consequences later on.

Criticising his players in public, bemoaning United’s admittedly baffling and scattergun transfer policy and lack of ambition, and questioning the ability of some of the more younger members of our squad. Players that we may well need to call upon in our first team for the first few Premier League matches. Jose’s air of geniality has all but vanished and, as fans, his demeanour has become increasingly hard to take.

For a man who we all believed had landed his dream job at our club, he hasn’t tried once to strike a connection or endear himself to our fanbase. The one time he did so was after that European semi-final with Celta Vigo and again after we beat Ajax in the resultant final to return to the Champions League.

As football fans, we accept a lot of things that wouldn’t fit in with reality in any other walk of life. Part of that is the romantic, and possibly slightly deluded notion, that the manager of our club is not just there to do a job. He should try and become one of us, to love the club as we do, to pour his heart and soul into it and to unite the fanbase to take our club to where we all want to be. That’s it more than just a job – rather a calling, a destiny and a lifelong mission. At the moment, it feels like it’s more community service for Jose. I’ve never seen someone so unhappy in his role as Mourinho. There’s always been an element of boom or bust, feast or famine for Mourinho – and history appears to be repeating itself again here.

I think Jose’s lowering expectations. Not one of us reading this think that United are going to start the season with ten straight wins. I’ve seen plenty of fans who fear that we could struggle to make the top six, and that we’re going to lose the opening game. Nobody is expecting us to come out swinging and brush aside all-comers as we did in such blistering fashion last time. No one is expecting us to get anywhere near the title. Maybe Jose thinks we can’t compete, maybe he thinks we’ve been overtaken by Liverpool and cannot catch City. Or maybe he’s playing a canny trump card to try and make United underdogs and the surprise package. The fact that I, and many others, have written this season off before it’s even begun speaks volumes.

The role of the underdog, or “little horse” as he once memorably rereferred to it as is a role that Mourinho has relished throughout his illustrated career. Facing the might of Arsene Wenger’s Invincibles and Sir Alex’s United upon his arrival in England, an unknown Jose beat both to a then record-breaking title win in 2005. At Real Madrid, he usurped Guardiola’s Barcelona – arguably the greatest club side the land has ever seen – to win the La Liga title. During his second spell at Stamford Bridge, he fought off the rising threat of Manchester City to win it again. Perhaps he’s trying to lower expectations to such an extent that our rivals are caught off guard so that any genuine challenge this time around comes as a major surprise. Whatever the truth, whatever the reality of what’s really going on at our club, there appears more uncertainty than ever.