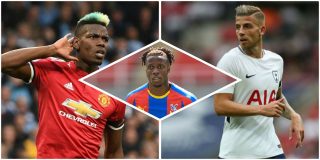 Brown states that United have agreed a £55 million deal for defender Toby Alderweireld and hints that the money may be used for The Lilywhites to sign Crystal Palace talisman Wilfried Zaha.

Though there is a concern at United that we’re being led along by Daniel Levy and Spurs. With so few days left to get players in, the London club would have the last laugh if we were left without a new centre-back signing.

That’s why we’re seeing so many reports linking centre-backs with United and we firmly believe the club is defending themselves if they need to make a last-minute bid elsewhere.

Moreover, Brown gave us an update on Paul Pogba as speculation grows that he could end up at Barcelona before the end of August. He states that he thinks the Frenchman will remain, but not everyone at the club is entirely convinced.

Give Brown a follow on Twitter — @Malachians — for more updates this summer and throughout the season. Watch the video below, recorded live.