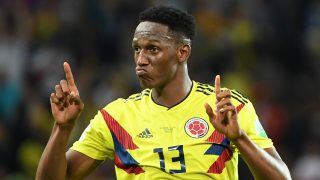 Jose Mourinho is getting even more impatient with Manchester United’s lack of transfer activity after failing to find an alternative at centre-back.

That had led to United making a £35 million bid for Barcelona defender Yerry Mina and the club wants an answer from the player today, as per The Sun.

The report states that United tabled the official offer to fight off moves from Everton and Ligue 1 outfit Lyon for the Colombia international. And the Old Trafford club expects Mina to pick them over every other club looking to seal his signature.

Furthermore, The Sun claims Mina returned from holiday and thought he was signing for United on Sunday, only to find out there was a snag and sought talks with the Barcelona board.

The 23-year-old centre-half will apparently be offered a five-year contract worth approximately £6 million if he joins Mourinho’s side.

United have until 5pm on Thursday to sign a centre-half, with the Premier League transfer window shutting earlier this summer.

We are also being heavily linked with Tottenham Hotspur’s Toby Alderweireld.