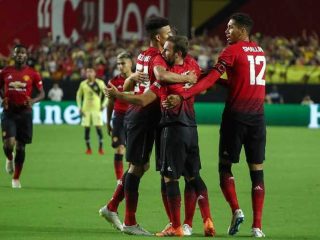 With Manchester United failing to bring in many signings so far this season, it would be a disaster to see one of the club’s best players leave.

The Reds showed last season that we lacked creativity in the final third and even now, before we potentially lose any players, it seems like we’re already lacking.

According to Gianluca Di Marzio, Juan Mata has been offered to Italian giants Inter Milan, news that United fans won’t want to be reading any time soon.

Mata doesn’t always appear in Jose Mourinho’s side but, when he does, the former Chelsea playmaker is usually consistent.

In the four and a half seasons he’s been at Old Trafford, Mata has proven to be one of the club’s most influential and creative players.

Moreover, on tour of the United States this summer, Mata has linked up brilliantly with Alexis Sanchez and many would have thought he’d start behind the Chile international against Leicester on Friday night.

In 186 appearances for United, the attacking midfielder has been able to clock up a total of 39 goals and 33 assists. Mata is a reliable player when it comes to big games and I wouldn’t be getting rid of him without a replacement.

It’s too late now to start negotiations for a Mata replacement. Mourinho would demand a player of high quality to play that creative midfield role, though he’s played the Spaniard on the right which is a total waste of time as he lacks any real pace.

There were brief links to Tottenham Hotspur’s Christian Eriksen this summer, although we can forget about that as Ed Woodward is clearly incapable of striking a deal with Daniel Levy.