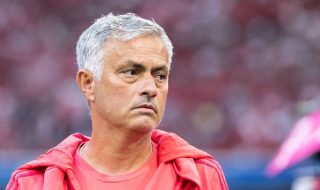 There was a time when almost every player in world football would have given an eyetooth to play for the firebrand Portuguese. His brand of football has never been anything other than quite mechanical, but that wasn’t always such an issue: the combination of Jose Mourinho’s career history – coupled with the wealth of his respective clubs – was usually enough to assuage any doubts over style.

No longer, it seems. The modern-day professional is aware of the difficulties experienced by Kevin De Bruyne, Mohamed Salah, Paul Pogba and Anthony Martial – to name but four – and wonders whether it’s all it’s cracked up to be. United remain one of the biggest clubs in the world with a huge financial pulling power, but there are many other destinations where life is easier and the basic wage just as generous.

There used to an old gag that the Manchester weather proved a major turn off for potential signings, but now Mourinho has brought the rain indoors: to play for him is to be exposed to the perpetual cycle of discord and acrimony.

It’s been the theme of our pre-season too. The will he-won’t he Anthony Martial saga aside, United have plodded across the west coast of the USA, with our manager muttering darkly about a lack of signings, a paucity of ambition and – perhaps most concerning – an undermanned and under-talented squad. Not only has it been hugely discouraging for us as fans, but the mood has turned dispiritingly sour before the competitive season has even begun. For everyone else, it’s been excruciatingly dull.

And that matters. The fallacy that modern football is purely a results business is only a half-truth. League position, continental qualification and winning trophies do, of course, continue to matter, but now too do the means by which these results are achieved.

Football clubs are supposed to be aspirational now, that’s the universal cornerstone of every major sporting brand, indeed for any major worldwide brand in any other walk of life, and United are no exception. It may not be imperative to play each game with reckless, gung-ho ambition each week, but these business models depend on the perception of that being possible – that trophies, glory and excitement are always just around the corner, and that each season will be better than the last.

Some managers fit this modern-day age perfectly. Pep Guardiola continues to revolutionise and re-model, and Jurgen Klopp – for different reasons – is also an ideal contemporary head coach. His personality made for media soundbites and his unrelenting gegenpressing style has helped to overhaul Liverpool’s dwindling fortunes. Within reason, is there a young player in Europe who wouldn’t want to go to Anfield? Klopp is responsible for that. In contrast, from being the continent’s pre-eminent, all-conquering managerial figurehead, Mourinho has become a footballing Chernobyl – chugging his misery into the game’s atmosphere. There is no evolution to his coaching anymore, no clear plan other than to buy at the top of the market and overcome the competition with a sheer weight of numbers. As that has become his identity, so it has become United’s too. It’s an outdated way of thinking that simply will never hold sway.

There was once a time when, if he left a job at lunchtime, Mr Mourinho would be fielding interested calls from begging chairmen before the sun went down. Not now. Today, barring a dramatic and unforeseen reinvention, he is approaching the end of his big-club lifespan. He’s out of step with the game and out of tune with the world which surrounds it.