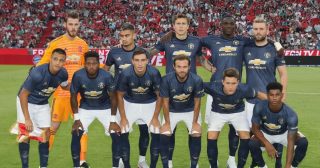 United’s pre-season campaign stuttered to a close with defeat to Bayern Munich in a high profile friendly in Bavaria, as attentions turn to our Premier League opener with Leicester City on Friday.

Jose Mourinho frequently bemoaned the fact that he learned little about his side’s preparations for the 2018-19 season, but here are five things we learned from the Reds pre-season odyssey.

The kids are alright

One of the many misgivings that have been levelled at the United manager throughout his career is that he’s failed to nurture and develop youth. But I think it’s safe to say this isn’t true, as the US Tour provided a tantalising glimpse into the future with a plethora of young starlets given their chance to shine in the absence of many of our more established World Cup men.

Mourinho didn’t have to do this, instead, he could have recalled the likes of James Wilson, who carries significantly more experience. But he chose not to and deserves credit for that, and the young Academy players not only showed that our age group sides are in as rude health as ever, but also that the future is bright. As fans, it was wonderful to get a glimpse of our next generation, with the likes of Tahiti Chong, Ro – Shaun Williams, Angel Gomes, James Garner, Joshua Bohui and 16-year-old Mason Greenwood all making their unofficial United debuts.

With United’s resources still stretched to breaking point through the continued absence of our senior stars, there’s a chance that at least one of these homegrown talents will be in the squad for the start of the season proper.

Second, only in stature to our iconic number 7 shirt, the number 10 has been donned by modern-day legends of our club, previously inhabited by the now departed duo of Wayne Rooney and Zlatan Ibrahimovic. Marcus Rashford – a bit part player for much of last season – graced the shirt for the first time upon his return to action in United’s final friendly against Bayern Munich.

Rashford has become the first homegrown player to wear the 10 since David Beckham in 1996/97. Other famous wearers of the shirt in the Premier League era include Mark Hughes, Ruud van Nistelrooy and Teddy Sheringham. Rashford started only 17 times in the league last term, often job sharing on the left-hand side with Anthony Martial.

With the Frenchman’s future unclear and no new winger in the pipeline, the shirt change indicates that Rashford is set to become the first team regular that he has to be. With the Reds right-wing berth lacking depth and numbers, Rashford can maybe do a job in that position despite being naturally left-footed. As one of England’s genuine 24-carat talents, he suffered a frustrating season last time out, but having debuted in the number 10 shirt he should go on to make a first-team position his own again.

With this being a World Cup summer, we always knew it would be a difficult and disrupted pre-season – not just for United but for any club with players who featured in the latter stages in Russia. Mourinho has certainly not been shy about voicing his opinion during his summer of discontent – from a lack of transfer activity, the lavish spending of our rivals and at the state of the threadbare squad at his disposal. Mourinho has repeatedly cut a downbeat figure, with his problems only exacerbated by the absence of 15 first team players, either through injury or holiday.

Claiming that he’s learned nothing, Mourinho – always a box-office figure, also refused to answer when questioned on our team’s title chances. This is on top of a pointed barb at Jurgen Klopp and Liverpool, that the World Cup has scuppered hopes of a strong preparation, and just about everything in between.

Having finished a mammoth 19 points behind Pep Guardiola’s all-conquering City last term, the need for new additions in the United ranks has been clear and obvious throughout our pre-season trudge across America. With such a chasm between us and the mob across town, both on paper and in reality, signing a solitary noteworthy player in £47m Fred will not change that. With the season set to begin on Friday, the Reds remain worryingly undermanned.

With a centre-back, our top priority, United’s scattergun recruitment policy has reared its ugly head again as we’ve lurched from Yerry Mina to Harry Maguire (twice), Toby Alderweireld, Jerome Boateng and seemingly everyone in between. Even if we do manage by some miracle to get in a top-quality partner for Eric Bailly, who remains the team’s best defender, we still need at least two more players before Thursday’s deadline, with the additions of a left-back and an out and out winger a must.

As usual, the Reds have been linked with seemingly every player on the continent, but none have been forthcoming. Fred aside, we’ve only got the underwhelming additions of a 35-year-old Stoke City reject in Lee Grant and unknown teenage full-back Diogo Dalot – who’s out injured anyway until October – to show for a frustrating summer of stale inactivity. Not only that, the dead wood that needs shifting – Chris Smalling, Phil Jones and Matteo Darmian to name but three – are no closer to being moved on.

Although results are irrelevant in pre-season, it’s an opportunity to try new things and experiment with personnel, formation and tactics, a chance to shape your side and establish an identity and a style ahead of the season proper. But we’ve not seen that from United or Jose. Take our final friendly against Bayern as an example – the Reds starting 11 wasn’t far off full strength but yet sat deep with an all too familiar stifling game plan, and we failed to register a shot on target in 90 minutes.

United have seemingly gone through the motions in the six friendlies and against the German champions, we had one effort on goal compared to Bayern’s 13. Even in the benign circumstances of a meaningless friendly, that’s worrying – especially in the final one before the start of a new season. Same old United, same old Jose. It doesn’t bode well.