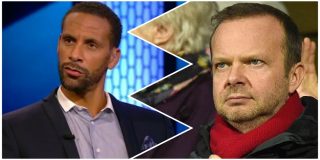 Rio Ferdinand has urged Manchester United not to sell Paul Pogba, amid claims his agent, Mino Raiola, wants him out of Old Trafford.

The club legend has also pleased with the Reds to bring in Toby Alderweireld from Tottenham Hotspur as the transfer deadline hits Premier League clubs on Thursday at 5pm.

Speculation over Pogba’s future is rife again with Barcelona believed to be the front-runners.

According to the Daily Mail, Raiola is keen for his client to leave United and is currently in Spain in an attempt to engineer a late move to the La Liga champions.

Strong reports on Monday night claimed United had rejected a bid of €50 million plus two players – believed to be Andre Gomes and Yerry Mina, as per Sky Sports.

Though it is suggested that super-agent Raiola is in Barcelona to try and force a deal over the line.

But Ferdinand – who made over 450 appearances for United – has urged his former club to keep hold of their £89 million record signing.

Don’t you dare allow this ED… #MUFC is Pogba’s home!! Silence these rumours ASAP & get @AlderweireldTob through the door 🤣👍🏻 https://t.co/cG3Nzyqzmo

Pogba has been merely linked with a stunning Old Trafford exit all summer, with Jose Mourinho previously stating the player is not for sale.

The 25-year-old lifted the World Cup with France and earned praise for his displays in Russia, but Mourinho hinted the player doesn’t have the same focus when he plays for United. That remains to be seen and Pogba has some unfinished business with us since arriving in 2016.

Pogba returned to his club on Monday after an extended break following his World Cup heroics.

Ferdinand also urged United to “get Toby Alderweireld through the door” before Thursday’s deadline.

Mourinho has made it clear to the club’s vice-executive Ed Woodward that signing a new centre-back is his top priority in the remaining days of the window.