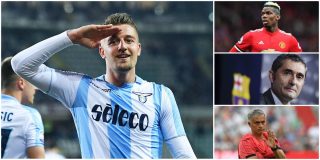 With just days remaining of the transfer window for Premier League clubs, Manchester United are reportedly looking at splurging £138 million on a new midfielder.

Not for the first time this summer, Sergej Milinkovic-Savic is linked with a big-money move to Old Trafford.

The Serbia international has attracted plenty of attention since joining Lazio in 2015 and has frequently been linked with some of the top clubs in European football. This very summer has seen reports that Real Madrid and Juventus are both considering bids for the former Genk midfielder, with Chelsea also thought to be interested.

According to Calciomercato, United are willing to stump up a club record fee for the player before the transfer window shuts on Thursday at 5pm.

Jose Mourinho has asked scouts to track SMS for some time, but such a bid would make you wonder whether he’s being used as a replacement for Paul Pogba, amid genuine interest from La Liga champions Barcelona.

Even if United are willing to make a bid for SMS though, it still seems highly unlikely a deal will materialise in time for the close of the window.

Let us know in the comment section below if you would be happy with SMS replacing Pogba?