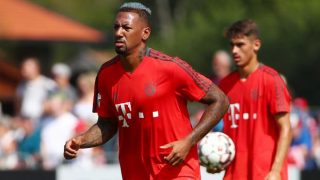 To gather more information on Jerome Boateng’s links to Manchester United, we caught up with the editor of 90min.de, Jerome Katz, a specialist on all things Bundesliga.

It has been reported all summer that Jose Mourinho is actively looking to add a new centre-half to his squad, with Tottenham Hotspur defender Toby Alderweireld topping the manager’s wish list with just two days left for Premier League clubs to get their business done.

That doesn’t leave much time and if United are to be strung along by Tottenham it’s important the club has backup options. There is a good chance that’s where Boateng could come into play.

Harry Maguire is another player on United’s transfer list, as is Yerry Mina of Barcelona. Both had great World Cups but it’s not always right to judge a player on that. At least with Mina, United have been tracking the Colombia international while he was at Palmeiras in Brazil.

Without further ado, here are Mr. Katz’s thoughts on the Boateng to United rumours.

Manchester United have been linked with Bayern Munich’s Jerome Boateng all summer. After previously selling us past-it duds – Hargreaves and Schweinsteiger – I get the impression Bayern are specialists when it comes to getting rid of players not reaching previous performance levels. Do you think the Bundesliga champions are trying the same trick again?

It seems like they are doing it now with a lower threshold. They are not actively trying to get rid of him, and his asking price is still pretty high (about 60 Million Euro it seems), but they seem to believe that they won’t need him for a long time anymore.

How good is Boateng currently and is his fitness a genuine concern?

While Boateng is still in his prime, he needs to get a bit more consistent when it comes to his game-opening (a lot of sharp long passes like Bonucci), but when he gets into his form, he is absolutely world-class also in this regard.

He still has amazing athleticism and, strength and speed. Overall he is one of the best central defenders in the world when healthy, without a doubt. But that is the issue, Boateng has a lot of injury problems. And this can easily be observed by looking at his statistics in recent years. He is rarely fully healthy, and this is his main problem.

Why do you think Boateng failed at Manchester City but became such a success at Bayern?

It’s just a question of fitness. At that time, Bayern Munich’s central defence wasn’t very good. So, like a lot of players, he just got the opportunity to show off his talent and fully took advantage of that.

Can you name any Bundesliga defenders, we wouldn’t know all too well, who would be better suited to United?

Currently no one. At least if you take out their potential.

Do you think a deal will happen?

If you look at all the potential players Manchester United has lined up for the position, it seems like Boateng plays for the club which is the most transfer friendly. Yerry Mina would be another gamble, Leicester don’t want to give up Maguire and a deal seems to be complicated for Alderweireld.

So, even though Boateng is not their first option, and even the player himself would rather want to play for a more offensively minded team like PSG, his move seems the most realistic. But still, going back to the original question, I think a deal is rather unlikely at the moment and would need a huge boost in form of an improved offeUnited. Currently, I would put the likelihood of a deal at 40%.