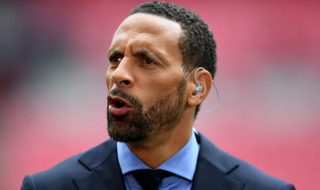 Former Manchester United centre-back Rio Ferdinand has cast his opinion on the best striker currently playing in the Premier League.

It’s hard to argue against Sergio Aguero but Harry Kane and Romelu Lukaku closely follow. Since arriving at Manchester City in 2011, Aguero has scored 143 goals in 206 league games, but in the 2-0 Community Shield win over Chelsea, he took his tally overall to 201 strikes with his double.

“I think he is the best striker in the Premier League. He was the hardest I played against; fantastic movement, pace and awareness,” Ferdinand told BT Sport, as per The Sun, before he was asked if he would prefer Aguero to Tottenham Hotspur and England striker Kane.

“Yeah, I would. In terms of someone who is hard to play against, he brings so much off both feet, and with his movement and pace he offers all sorts of problems.

“Kane is a great player, but Aguero just takes it.”

Ferdinand played against some top strikers throughout his career and won everything he could at United bar an FA Cup.

There were doubts about Aguero’s future at City when Pep Guardiola came in. The former Barcelona and Bayern Munich boss signed Gabriel Jesus and it was thought the Catalonian coach preferred the youngster.

That was obviously a kick in the teeth for Aguero, who has since got back in the City line-up and is as dangerous as ever. He’s always alert and ready to pounce when it matters most.