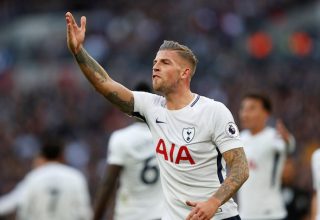 Tottenham Hotspur defender Toby Alderweireld is reportedly eager to complete his transfer to Manchester United with deadline day just a few days away.

The Belgium international has been strongly linked with the Reds throughout the summer, and there’s been a fresh update from Belgian media.

According to HLN, Alderweireld has decided he ‘absolutely’ wants to leave Spurs and hopes his club will find an agreement to allow him to move to Old Trafford.

However, the report states that Tottenham are holding out for £58 million, which many consider a risk to spend on a 29-year-old who has had injury troubles in the not too distant past.

Still, a fit Alderweireld is probably the best centre-back in the Premier League and he seems the ideal option to bolster Jose Mourinho’s defence.

We simply cannot start the season with Chris Smalling, Phil Jones or Marcos Rojo at the back. Eric Bailly and Victor Lindelof partnered one another in a pre-season friendly against Bayern Munich and we think fans would be much happier with that alternative at the back.

But, there’s still a need to sign someone of high calibre for a centre-back. United haven’t got long left to get this done.