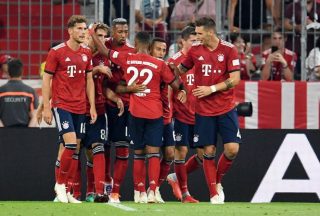 Man Utd deservedly lost their last game of pre-season against Bayern Munich after a poor performance at the Allianz Arena.

United lacked attacking intent throughout the game, with no real urgency to create chances in the final third.

They were punished through Javi Martinez’s glancing header from the impressive Thiago’s corner on the hour mark. United couldn’t fashion a clear-cut opportunity in the game and were lucky not to have conceded more with an excellent chance for Serge Gnabry and a disallowed goal from Arjen Robben.

The performance highlights the need for investment in the United squad with just four days of the window to go.

Here are 5 things we learned in United’s disappointing display

There were times at the Allianz Arena where United could simply not get out of their half. They were outplayed against a Bayern side playing their first game in pre-season. Andera Herrera and Fred were both sloppy on the ball, often rushing their delivery under intense pressing from the German champions. Nemanja Matic’s presence and assurance in the midfield has been missed for United this pre-season, and his injury will be a concern to Jose Mourinho going into the new campaign. United’s midfielders must step up on Friday night against Leicester.

Mata requires competition on right-flank
United played without any real width again tonight with widemen Alexis and Juan Mata both cutting inside from their wing. Alexis was effective in spreading the play from left to right when we did have the ball but did not have someone with real pace off the right to provide an option on the counter-attack. We require someone from the right who is direct and has the pace to take his full back down the line. Juan Mata still has his uses in a United shirt, but is not gifted with any pace and is not at his best on the right-hand side . Perhaps Marcus Rashford could do a job for Jose Mourinho on the right flank?

Thiago the one that got away

Bayern midfielder Thiago Alcantara once again showed his class in Bayern’s first pre-season friendly. Thiago was the dictator in Bayern’s midfield, controlling the tempo of which the game was played. The Spaniard’s ability to cut through United’s midfield was exquisite yet so effortless for the man who has won five domestic titles already in Germany. United were heavily linked with the player before his move from Barcelona in 2013 in a deal worth just £25m. He’s undoubtedly the sort of player that would help United in their transition from defence to attack.

Darmian not good enough to start the season

Matteo Darmian proved many United fans calling for him to go right with another poor performance at right-back. The Italian struggled to cope with Bayern Munich’s blistering attack, but was also sloppy in position, very rarely finding a man in a United shirt. Many fans will be hoping captain Antonio Valencia will be fit to face Leicester in the Premier League opener on Friday. This game may have been Darmian’s last for United; he has already expressed his desire to leave with club with Benfica and Napoli both interested in signing the Italian.

Jose Mourinho did not hold back in his pre-match comments when asked about transfers. The boss is aware it will be a long season ahead without any more reinforcements.

“Liverpool is buying everything and everybody want, I know that he (Ed Woodward)  tries to do the best for me and I still have a few days to wait what is going to happen. If we don’t make our team better it will be a difficult season for us.” said Mourinho

Ed Woodward must get at least one deal over the line to boost the confidence of United fans going into the new season, but who the new addition will be remains to be seen.