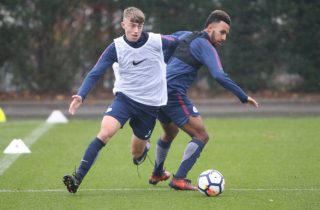 Manchester United have completed the signing of young defender Reece Devine from rivals Manchester City, according to reports.

The Manchester Evening News claims it’s a done deal for Devine to move across Manchester and link up with our U18’s for the new season.

While the 16-year-old has yet to make a name for himself, the MEN claim academy manager Nicky Butt snapped the left-back up this summer in what looks a promising signing for the future.

City’s academy has grown in recent years but how many will get competitive game time under Pep Guardiola? It’s all well and good having state of the art facilities, but what good is it if the youngsters don’t get a chance?

United should aim to scout the best youngsters in the game and build for the future. It’s difficult but a cheaper model than trying to sign marquee signings each summer, even if that feeds the transfer junkies.

Best of luck to Devine at United once it’s all confirmed.

REECE DEVINE: Here is out U18 signing after signing pic.twitter.com/EgDeDgG4ly