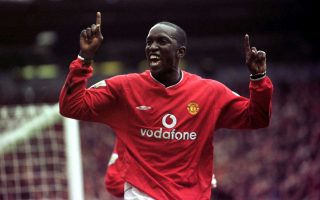 Summer transfer windows can be frustrating, especially when you’ve finished well behind the champions the previous season and with a World Cup seeing the club linked with everyone. The situation currently melting the minds of the transfer gossip junkies on social media isn’t too dissimilar to that of the summer of 1998.

In that summer, United brought in a winger from Gothenburg, a Dutch centre-half and was welcoming back Roy Keane after a cruciate knee injury had cut short his 97/98 campaign. There was one more signing to be made, of course. Not Patrick Kluivert, who was widely tipped to be Andy Cole’s replacement, but Dwight Yorke, who was to partner Cole in attack in a way I would say we’ve not seen since.

Here, two decades after the Trinidad striker made the move to United from Aston Villa, it’s a chance to remind ourselves of how good he was but also, how great he could have been…

It was August 20th, 1998, when Dwight Yorke became United’s number 19. The season had started with United needing a David Beckham free-kick to draw with Leicester City at home. A striker was sought after. Teddy Sheringham had struggled in his first season as he tried to fill the chasm left by Eric Cantona’s retirement. The feeling was that in the 97/98 run-in United had faltered due to a lack of goals and cutting edge. Like I said, Kluivert had been many people’s choice following a solid World Cup.

Instead, Sir Alex Ferguson picked up Yorke for £12.6 million. John Gregory, Aston Villa manager and a top tit, was furious.

I’ll be honest, the signing underwhelmed me. It wasn’t that marquee signing that I (wrongly) felt we needed. Not Del Piero or Salas or Batistuta, but the lad from Villa Park who smiled all the time.

Then I saw his home debut.

He was outstanding, scoring two goals in a 4-1 demolition of Charlton Athletic. It’s always amazing the way you can scrutinise a player once they represent the club you support. I’d thought nothing of Yorke before that night. He played as a number 10, dropping deep to receive the ball. His first touch was quality and had been tested in his first training session when Roy Keane had smashed a ball at him and followed it with the comment “Eric used to kill them”.

As starts to a United career go, Yorke’s was up there with some of the best. Perhaps better than his goals were the way he linked the play. He could swivel away from defenders and slide passes to the wide players. His heading, proven by his goals on his debut, was exceptional. The number of headers he scored that season from David Beckham crosses was perhaps the biggest surprise not just for supporters but for opposition defences. Inter Milan was unable to cope with that combination in United’s Champions League quarter-final, they weren’t alone.

The 98/99 season allowed the squad to ride on the crest of a wave as the confidence flowed and the trophies drew nearer. But there were still glimpses of the problems Yorke could face. Peter Schmeichel revealed in his book how Yorke had received the dreaded “I had a nightmare shirt” following a poor performance in training. Yorke was gutted at the fact he’d been singled out and a day later, Yorke and United were beaten at Sheffield Wednesday. It was the last time the post-training shirt was to be given out that season.

Over the course of that season, Yorke was to notch 29 goals as United went onto the Treble. Yorke had been the best of United’s quartet of forwards but was the only one of the four to fail to score during the three steps towards United’s historic triumph.

Unfortunately, Yorke would never recover the same form. At least not to such a consistent level. The following season saw more goals and more silverware but there was a noticeable difference in the standard of performance from United’s smiling striker. A treble hangover? Maybe. But of those who suffered in trying to get themselves back to the level they were at in May 1999 (and Gary Neville was one of them), Yorke seemed to suffer the most.

Whilst Andy Cole was hitting the form of his United career, Yorke was starting to see his influence on games fade. Ruud Van Nistelrooy was set to join United in the summer of 2000 and you wonder whether Sir Alex would have offloaded Yorke then when his stock was still high. Instead, a knee injury would delay the Dutchman’s arrival and Yorke earned a reprieve. But if his second season was the Treble hangover, his third season was Ant MacPartlin’s latest TV comeback.

It was a shame, but he’d gone. No more smiles, the touch that was so assured was heavy and the goals had dried up. There were attempts to get him going again. The Old Trafford crowd stuck with him and there were glimmers when you felt he could recapture his best football. Sir Alex was critical but still gave him chances. He took the chances that came his way in a magical 45 minutes against Arsenal. That afternoon as he fired a first-half hat-trick, there was hope that he could come good again.

That performance saw him selected for a crunch clash away at Bayern Munich in the Champions League, perhaps it kidded Ferguson into thinking the Yorke and Cole combination had one more big game in them. United crashed out and Keane made his comments about it being the “end of the road for this team”. You can’t help feeling that Yorke was in the firing line. It was Keane who had literally gripped Yorke a few months earlier. After Yorke scored in the closing stages of a win over PSV Eindhoven, the Irishman was the first to grab him by the shirt and shout “welcome back!”. It was one of many false dawns over the last two years of Yorke’s United career.

The arrival of Van Nistelrooy and attempts to partner him with Paul Scholes meant that there was now no need for United to have four strikers. In truth, Ruud was that good, no one else could get a look in. And so, Yorke was cast aside. The circus of his relationship with Jordan and the tales of him falling asleep during stretching sessions on tour can be good fanzine gossip when things are going well, but when you’re not doing it on the pitch it can be harder to not judge a player harshly.

So desperate was Sir Alex to sell Yorke to make room for Paolo Di Canio that he was seen pushing Yorke into the Middlesbrough changing room before an FA Cup tie (that United would lose in one of the limpest ways imaginable). Yorke would later write in his autobiography how that episode hurt him more than any other during his time at United.

The chance of a fresh start at United was scuppered by Sir Alex’s U-turn on his decision to retire. When the manager made the announcement to the players, a voice said after Ferguson left the room “that’s you fucked then Yorkie”. And he was.

That summer saw a move to Blackburn to link up again with Cole. It was a sad end to a United career that delivered so much in that first season, but Yorke isn’t alone in failing to reach the heights of a debut season. It was sad because of the ability he had. He was a player who could partner any of the strikers who played while he was at the club but the desire to kick on post-treble wasn’t quite there. It takes a certain type of player to succeed at United and a different type of person to stay successful over time.

As the transfer window is closing 20 years after Yorke’s arrival it’s worth remembering that it’s about signing the right players for the team and the club rather than the biggest names. I also can’t help but think of a player in an outgoing transfer saga who, for all the ability in the world, when you look at his football and his character, could be better off elsewhere.

That player who could be on his way certainly doesn’t have Yorke’s smile (or a smile at all I think!) and is unlikely to win the trophies Yorke did in his time in Manchester.

Dwight Yorke may not get into many supporters’ greatest teams. He probably wouldn’t make the bench. But he was the figurehead in an attack in United’s most successful side. As laughable as it might be that a player can win the treble and not fulfil his potential, when he was good, Dwight Yorke was that good.

If United’s next signing can be the springboard to success like we enjoyed in 1999, we’ll be smiling just as much as Yorke did.