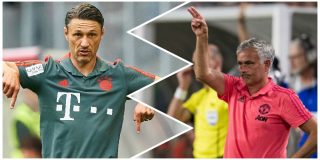 Manchester United travel to Germany for our final pre-season match ahead of our Premier League opener against Leicester on August 10. There, the Reds face one of Europe’s most decorated sides in Bayern Munich.

The reigning Bundesliga champions also competed in the International Champions Cup and kicked off their tournament with a convincing 3-1 win over Ligue 1 giants Paris Saint-Germain, who today have been linked with a move for Marcos Rojo.

They followed up that victory with successive defeats to Juventus and Manchester City.

Fortunately for Bayern, the Bundesliga season starts two weeks after the Premier League, so they have more time to prepare for their competitive campaign. They will be using the friendly against United as preparation for their German Super Cup (the German Community Shield) against Eintracht Frankfurt next Saturday.

MUTV subscribers will be able to watch the game live with kick-off at 19:15 on Sunday evening.

Meanwhile, United’s pre-season was a bumpy ride. The Reds started it with two draws against Club America and San Jose Earthquakes followed by wins over AC Milan (on penalties) and Real Madrid, while rivals Liverpool hammered us 4-1.

According to Marissa Thomas of the Mirror, United quartet Marcus Rashford, Phil Jones, Romelu Lukaku and Victor Lindelof have all returned to training early from their holidays, but none are likely to feature with the friendly coming too soon for them.

Anthony Martial has also returned to training following the birth of Swan, his child.

Bayern will be without Arturo Vidal, as according to the Evening Standard he is on the verge of joining Barcelona for £27 million.

Hopefully, Alexis Sanchez continues the form he showed over in the United States. ESPN’s Rob Dawson even singled out the Chilean after United’s win over Real Madrid, which does well for the Reds that he is enjoying a strong pre-season.

A welcome win for United to end the tour. Further ahead in their preparations than Real Madrid, but still scored two nice goals and deserved to win. Sanchez showing again he could be United’s key man this season.

Given the promising shape the former Arsenal man seems to be in, United may have the edge here, though Jose Mourinho will want a more defensively solid performance than his side have produced of late.