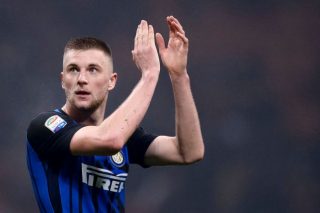 Inter Milan star defender Milan Skriniar has spoken to La Gazzette dello Sporto about his future, amid speculation that Manchester United would come back in for him.

In June, Skriniar revealed that he was flattered by United’s interest but said he remains happy in Milan. This all came from a report suggesting he was the subject of a £57 million bid, as per The Express, before Inter rejected the approach.

Skriniar has developed a reputation as one of Europe’s brightest young defensive prospects. Last season, he completed 90 minutes in all 38 of Inter’s Serie A matches, scoring four goals and picking up just two yellow cards.

Asked about interest from United, Skriniar said the following: “Man United? It’s nice to know that you are appreciated by other big clubs in Europe but I’ve never thought to leave the club. The future depends on the club and I accept whatever they decide. New contract? My agent is in talks with chiefs of the club, it’s not done yet, let’s see what happens. Juve or AC Milan? No, in Italy I will only play for Inter.”

There were also reports indicating that Bayern’s Jerome Boateng was available for around £50 million, but they’ve already sold us a dud in the past, who was only fit for a retirement home at the time.