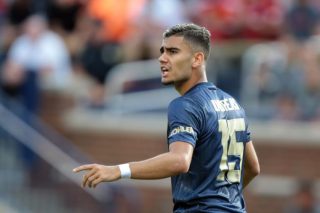 Jose Mourinho is likely to start Andreas Pereira in Man Utd’s midfield for the opening Premier League of the season against Leicester City according to a report in the Daily Star.

The 22-year-old has impressed the manager in the pre-season tour of the US, playing more minutes than any other United player. His performances have been assured and confident, his stand out the moment a stunning free-kick against Liverpool which showed the Brazilian’s class. He has been deployed in a deeper ‘number 6’ role by Mourinho and is expected to play in this defensive role against Leicester.

Mourinho is lacking in midfield options due to Nemanja Matic’s knee injury, with Maraoune Fellaini and Paul Pogba yet to return from their post World-Cup breaks.

Pereira has enjoyed two successful loan spells at Spanish sides Granada and Valencia, but is now ready to cement his place in United’s first team.

“I’m more prepared now than last year. I spoke with the manager about that and now I want to stay and do my best for the club. I just want to continue showing him and the staff that I can play here at United,” said Pereira.

“I’m also happy with the team here and we’re getting better every game.”

United fans will be excited that Andreas Pereira is finally getting his chance to shine. We have seen glimpses from the player in attacking roles, but his composure on the ball and excellent passing range could be a key asset to Jose Mourinho in a more defensive role at the beginning of the season.