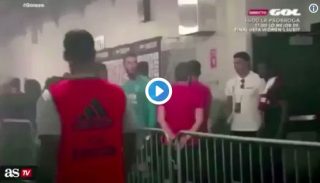 Real Madrid midfielder Marco Asensio is one of the most exciting young players in world football at the moment and he’s also an expert wind up merchant.

The Spain international aimed a cheeky dig at his fellow compatriot David de Gea, whilst mocking Liverpool goalkeeper, Loris Karius, who played a part in handing Los Blancos the Champions League back in May.

Hitting two birds with one stone, he references De Gea’s poor World Cup performances by shouting ‘Karius’ at United’s No.1, which in itself is the ultimate criticism you could throw at a goalkeeper in 2018.

It was only a light-hearted joke but, deep inside, De Gea probably wanted to deck Asensio.

This occurred after United beat Los Blancos 2-1 in their pre-season friendly. Alexis Sanchez and Ander Herrera popped up with the goals.

Marco Asensio calling David de Gea “Karius” as the players were in the tunnel for the Real Madrid vs Man Utd friendly. pic.twitter.com/4ctVx7jZu7