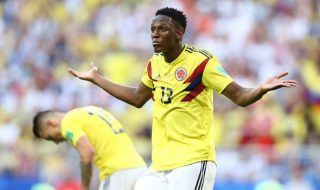 Manchester United are reportedly set to switch their focus to the transfer of Barcelona defender Yerry Mina after struggling to land their other defensive targets this summer.

It’s a sad state of affairs when Manchester United – the biggest club in the world – walk away from a Leicester City centre-back because he’s too pricey. Harry Maguire’s market value went through the roof after an impressive World Cup campaign, forcing the Reds to look elsewhere for a defender.

Mina, 23, struggled to settle at Barcelona last season but, like Maguire, impressed on the international stage with big performances for Colombia in Russia, where he scored a total of three goals.

According to the Daily Mirror, Mina is available for a reasonable £30 million and is now set to be targeted by United after their failed pursuits of Maguire and Tottenham’s Toby Alderweireld.

The report suggests Maguire is set for talks over a new contract and a big pay rise with the Foxes and, while Alderweireld may still be available, Daniel Levy is yet again proving to be a tough negotiator.

These are the reasons United have been slightly put off the Premier League duo, as Mina may arrival for a fraction of the cost and seems a decent option.

But will he struggle to settle at United like he did at Barca last season? We need someone to come in and seriously bolster our defensive options.

Alderweireld is still my favourite option for the role.