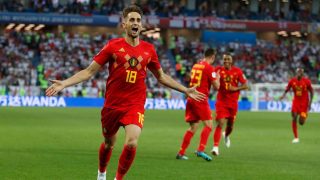 A piece on Caught Offside crossed our path this morning to suggest Manchester United should consider using the clause in Adnan Januzaj’s contract to bring him back to Old Trafford.

Januzaj had his share of thrilling moments at the World Cup this summer, though he wasn’t a starter in Roberto Martinez’s side, which reached the semi-finals of the tournament.

The Manchester United youth team graduate failed to build on the promising start to his United career a few years ago and left a bad impression during his loan spell at Bundesliga outfit Borussia Dortmund.

According to HLN, the 23-year-old is now attracting interest from Leicester City in the final week of the summer transfer window for Premier League clubs, with the view of replacing Riyad Mahrez after his move to Manchester City.

The Foxes have previously got the best out of a number of relatively low-profile players with a point to prove, so this move may suit Januzaj.

Well-connected Belgian journalist Kristof Terreur has since tweeted that United have a special clause that allows them first refusal on Januzaj. Caught Offside writer Magnus Eriksen believes we should activate it now.

Leicester are seriously interested in signing Adnan Januzaj. Man United have a first option to sign him back. #lcfc #mufc (via @niels_27) pic.twitter.com/R4AsVhBbOZ

Personally, I’m of the view that ship has sailed and Januzaj hasn’t exactly set the world alight at Real Sociedad. United have a pool of young talent coming through and it would be unfair to sacrifice them for a player who, previously, didn’t do enough to warrant a new deal at the club.

While United may need more in the attacking department, with Anthony Martial set to leave, it would be risky to re-sign Januzaj to resurrect his career.

This one is a none runner in our opinion.