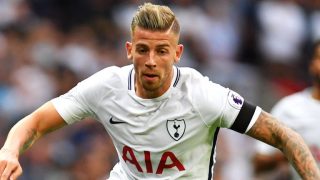 I couldn’t believe what I was hearing when Sky Sports claimed Tottenham were listening to offers for Toby Alderweireld, Moussa Dembele and Danny Rose. Well, less so for Rose, but Daniel Levy must have a trick up his sleeve.

Spurs must have something in the pipeline if they’re willing to let three big names leave the club, with just 7 days remaining in the transfer window.

It has been suggested on Stretty News all summer that Toby Alderweireld would be the perfect fit for Jose Mourinho’s defence to partner Eric Bailly, despite also being heavily linked with Leicester City’s Harry Maguire and Barcelona’s Yerry Mina.

The other two centre-backs are not only less appealing, they’ve yet to reach the elite standard.

Alderwerield, on the other hand, has what it takes to be one of the Premier League’s best defenders when fully fit.

Respected Spurs blogger, Nathan A Clark, addresses the situation below.

What happened between Alderweireld and Pochettino last season?

It looks like, after his injury last winter, Alderweireld’s camp, perhaps reacting to the existential dread that can set in with a lengthy injury reneged on the existing wage offer and began demanding more. In time that turned into agitating for a move to a club who would match those higher wage demands.

Pochettino has never been one to put up with this kind of behaviour and, even after returning to fitness, was very reluctant to hand Toby game time.

Would losing Alderweireld to a domestic rival set Spurs back this season?

I think it would set us back in the sense of we will have officially returned to being a club who will sell players to our domestic rivals. Between Berbatov and, last summer, Kyle Walker. Tottenham had managed to go a decade only ever selling up abroad.

In terms of on the pitch, Spurs may be losing the best defender in the league but will be retaining two of the remaining top five or so in Vertonghen and Sanchez. With the potential fee (or player swap) for Alderweireld’s signature, the club have the capacity to come away from this situation quite well.

Are you surprised Spurs are welcoming offers for Dembele too?

Moussa Dembele has been an incredible servant to the club and the gap he will leave if he does go will be a tremendous one. The quiet reality though is that, physically, he is rapidly deteriorating.

He still manages to find stretches of fitness, and when he does he exudes class and control, but last season that last only lasted around five or 6 games. This injury knowledge doesn’t appear to be very public so it makes a lot of sense to turn a profit on the Belgian while his stock is so high.

Should Alderweireld join United, what can we, as fans, expect?

Toby Alderweireld is the archetypal modern defender. His calmness under pressure, on and off the ball, is icy and he will serve Mourinho in both high-defensive lines and also those infamous deeper-blocks against the rest of the top six.

Where he might be most useful for United, though, is in his passing. His quick diagonal passes out to the wings are laser accurate and will enable United to change the tempo of their attacks when things are looking stagnant.

Your objectives for the new season?

It’s a new season and a new stadium. To simply continue as before, finishing in the top four while playing beautiful football we will do ourselves proud. We can top that off by capturing the mood of the club at the moment with a domestic cup win or at least deep run in the Champions League.