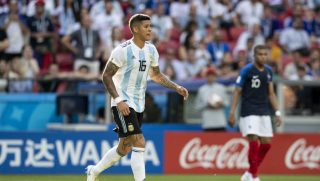 According to Goal, the Toffees are keen to recruit a new centre-back and could be set to turn to the Argentine as an alternative to Barcelona’s Yerry Mina as they struggle to get the deal through.

As per the Daily Mirror have also linked Mina with United, though Goal claim to understand there is no interest in the Colombia international from the Reds.

It remains to be seen whether the 23-year-old would be a good fit for the Premier League, as he struggled to settle in at Barcelona following his January arrival.

Rojo, who is a lot more experience, albeit injury prone, has never quite booked a starting place at United.

He was previously linked with a move to Premier League newcomers Wolves, cited by The Sun, though that speculation has since died down.

There seems to be little doubt Rojo could do a job for a club like Everton. We’ll just have to wait and see.

Meanwhile, United’s interest in Mina looks certain but they’re not giving up on other targets such as Harry Maguire and Toby Alderweireld. The latter, especially, would streghten this side and accommodate defenders such as Eric Bailly and Victor Lindelof perfectly.