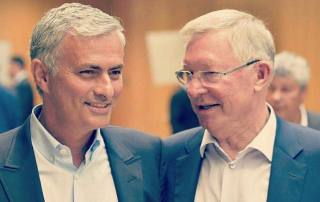 With the start of the Premier league in sight, the prospect of a harmonious Manchester United fan base seems unlikely, to say the least.

Comments made by Jose Mourinho on United’s pre-season tour in America have (obviously) made the headlines.

Are some of us mad at him for voicing his opinion? Or is he actually just emphasising our own thoughts, but it seems strange coming from the manager himself?

Of course, he could sit there for hours praising his players and expressing his optimism for the campaign around the corner. However, if there was one morsel of negativity, you can guarantee that is what the press would put the focus on. In turn, making its way back to the fans to add their own thoughts.

Do I agree with every word that comes out of his mouth? Absolutely not. But can I relate to his frustrations? Yes! He perhaps hasn’t had full freedom when it comes to his role making moves in the transfer market. The Chinese whispers in the media doubting his every decision and relationship with players and fans alike can’t help matters. And all this before the Premier League season has even begun!

There are already serious doubters. Those who idolise Anthony Martial and can’t fathom why Jose could ever (reportedly) take issue with his play or attitude. Those that would happily exile Martial from the team immediately. Those who are angry with the signings we haven’t made. Those who are happy with the signings we have made. And sure enough, those like myself pondering what is the truth in all this. Can you be sure your opinion is based on the truth and not the stories that have always followed United and always will?

Do I think the squad is one hundred per cent cut out for fighting or winning a title as it is? Probably not. A tweak here and there wouldn’t go amiss. Sure, there are players still at the club who I perhaps think aren’t playing to their full potential. Yes. There is always room for improvement. But do I believe we could be up there with the right harmony and balance in the squad? And ultimately style of play and flair!

I can’t help but feel excited at the new possibility of it all though. Paul Pogba, hopefully, inspired by his recent World Cup win in midfield. Fred ready to prove exactly why we bought him. The realistic possibility of Harry Maguire coming into the fold to reinforce the defence. And who knows? Maybe even intriguing goings-on that we have no idea about yet.

All I know is, last season was a definite improvement in the Post Fergie era. And if that notion continues, we could fall in love with the team all over again. Negativity, wanting the manager out or giving up before we’ve even really got started does not help matters.

Talking of Sir Alex Ferguson, it was a truly special moment seeing his recent message to us all following his illness and hospitalization. So glad to have you back boss!

If he can still give Manchester United his full backing, then why can’t we?

Counting down the days…