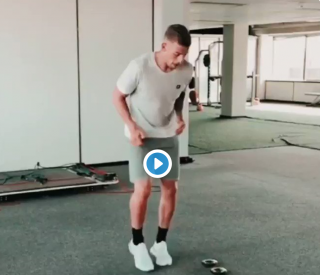 Manchester United transfer target Toby Alderweireld has dropped the biggest hint yet of where his future lies with the Premier League season soon to kick-off.

The Belgian centre-half has enjoyed a well-earned break after playing an instrumental part in his country reaching the World Cup semi-finals and beating England in the third-place playoff.

Alderweireld played alongside Manchester City’s Vincent Kompany at the tournament as they formed a formidable partnership in the heart of Belgium’s defence.

However, at club level, things haven’t gone as smoothly. The 29-year-old had a difficult season with Tottenham, struggling with injuries and being left out of Mauricio Pochettino’s first team.

This summer, he has also been strongly linked with a switch to Old Trafford.

According to The Evening Standard, United have monitored his situation and held talks with Spurs about a possible deal a few weeks ago.

They also report that Alderweireld has now hinted that his immediate future remains with Spurs, revealing his imminent return to pre-season duty with the squad.

“I will return to London this weekend for the start of pre-season with my club,” he told reporters, as per The Evening Standard.

Getting ready for the new season 💪🏼 pic.twitter.com/P9AUoGD9KB

That will come as a blow to Jose Mourinho, who is determined to strengthen his defence before United take on Leicester City for their Premier League opener on August 10.

At this stage, with 7 days remaining for Premier League clubs to sign players, Ed Woodward has a lot of work on his hands and Mourinho is piling on the pressure.