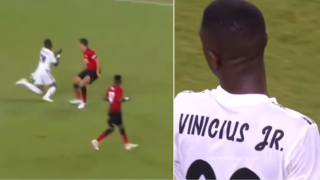 Shortly after being presented as a Real Madrid player, Vinicius Jr. has made his eagerly awaited debut against Manchester United.

The pacey 18-year-old caused United a number of problems down the left wing, though there are parts of his game that could do with addressing.

Vinicius Jr with the worst dive of all time…

Still, he nor his team-mates were unable to pull back from a two-goal deficit as United went on to win 2-1. Karim Benzema scored the only goal for the 2018 Champions League winners.

New Real Madrid manager Julen Lopetegui can take positives from his youngster’s performance, but there is one niggling negative he shouldn’t ignore.

The former Flamengo attacker went down too easily on a number of occasions, especially in the 58th minute after Matteo Darmian appeared to brush his hand off Vinicius Jr’s face. He then produced a frankly embarrassing dive.

Does Darmian even make contact? Here’s a slow-motion video for you to make your own judgement.

Let us know in the comments below.