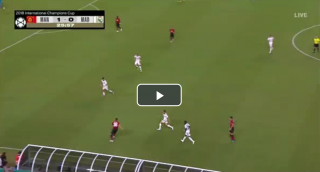 Another well-worked team goal from Manchester United, who currently lead the European champions 2-0 in Miami.

Alexis Sanchez and Juan Mata, two technically gifted players, have had a wonderful understanding on tour. They combined for both goals tonight and look set to take that excellent form into the new season wth them.

The goal came from a counter-attack with Ander Herrera arriving late on to hammer home.

Mata found Sanchez inside the box before the Chilean headed-down the cross for Herrera to take advantage with his powerful shot.

United’s pre-season doesn’t need explaining. We’ve been very poor and the manager’s frustration, when you reconsider them, are pretty fair.

He doesn’t want to go into a new season expecting failure like any of us, so why are people acting so surprised and angered? Tonight will silence a few of them – but not Mourinho, who will stick to his guns until Ed Woodward and the Glazers listen.