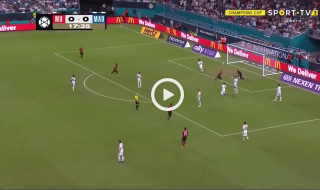 Alexis Sanchez, who scored earlier in this tour against AC Milan, opened the scoring for the Reds against the Champions League winners.

The goal itself saw a beautiful combination of link-up player, with Ander Herrera playing a wonderful through ball to find an overlapping Matteo Darmian before the Italian’s low-cross, was converted by Sanchez.

United look a lot fitter than Madrid, who are currently keeping the ball comfortably with a very young side out. The Reds have fielded a more experienced since than before on this tour.

The tour has been far from ideal thus far, after the recent 4-1 hammering against bitter rivals Liverpool.

Mourinho doesn’t seem happy, we’re missing key players and Ed Woodward has failed to deliver. A boost of this nature is needed.

Sanchez and Mata have continued their brilliant form together.

Let’s hope the Reds continue this and get a major win under their belt before the new season starts.