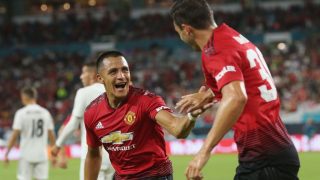 Jose Mourinho has been pretty downbeat this summer after what was below par tour of the United States.

And, to be fair to Alexis, he’s been terrific on tour since sorting out a visa issue which kept him from travelling out to America at the start of the tour. His performances against San Jose Earthquakes, AC Milan and now Real Madrid certainly did enough to excite the United fanbase and manager.

The Reds defeated European champions Real Madrid 2-1, with the Chile international grabbing the opener before assisting Ander Herrera for the winning goal.

Alexis didn’t hit the ground running after his January arrival, but there was a feeling a full pre-season with his new team-mates would help sort that and it’s beginning to look that way.

Mourinho, who has appeared miserable throughout the tour, has seemingly lifted his spirits for the time being.

Speaking to the press after United’s win over his former club, Mourinho said: ‘Alexis Sanchez is fresh, the way the man is running, I think he is in fantastic condition.’

United open their 2018/19 campaign against Leicester in under two weeks and supporters will hope Alexis can replicate his pre-season form.