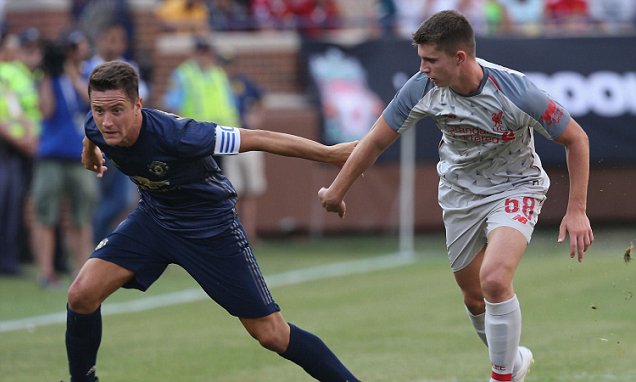 Manchester United midfielder Ander Herrera insisted Jose Mourinho is happy with his squad going into the new season, claiming United are able to challenge for the Premier League without the need of any more additions. Herrera was speaking after his wonderfully worked second goal proved the difference as United finished their US tour with a 2-1 victory over Real Madrid in Miami.

“I think we have very good players. We can fight for every title but if the manager wants to strengthen the team, it is something between him and the club”, said the Spaniard in a post-match interview with Sky Sports when asked about new signings.

Jose Mourinho and United fans have both voiced their frustrations at the lack of transfer activity this summer, with Brazilian midfielder Fred the only signing likely to break into the first team. Mourinho has already said he expects one more signing to come in before the window shuts on August 10th, but would ideally prefer two new additions. United have been heavily linked with centre-backs Yerry Mina and Harry Maguire, as well as Croatian winger and World Cup finalist, Ivan Perisic.

Meanwhile, 28-year-old Herrera is hoping to impress this season in order to earn a new contract at Old Trafford. The Spaniard has one year left on his current deal and some reports have linked the midfielder with a move to former club Athletico Bilbao.

However, Herrera is focused on succeeding at Old Trafford. “I am going to try to give everything in every training session and every game to deserve a new contract,” he said. “When you play for one of the top five clubs in the world, you don’t want to leave. You want to stay as long as possible.”

United fans will be hoping Herrera can shine in the midfield this season along with Brazilian duo Fred and the returning Andreas Pereira after his loan at Valencia.