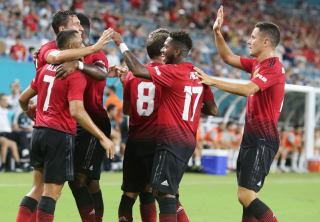 Manchester United fans were excited by Fred’s performance versus Real Madrid after he impressed in his first start for the club.

The Brazilian made a substitute appearance off the bench when Jose Mourinho’s men suffered a 4-1 hammering against bitter rivals Liverpool, on Saturday night.

Looking back over his performance against a weakened Real Madrid side, it’s fair to say Fred did enough to have an impact on United fans.

Mourinho started with the 3-5-2 formation and Fred was able to show his quality as Andreas Pereira continued to take up a deep-lying midfield role, with Scott McTominay part of the back three.

With pace, Fred showed he’s a good dribbler with a high standard of passing. He looks set to take up a box-to-box

The former Shakhtar Donetsk man had a number of offers on the table – including one from Manchester City last January — but choose United.

This is how Manchester United fans reacted on Twitter:

Fred looks class in midfield, going to be so exciting seeing him this season. #mufc

FRED is Fantastic! A Carrick type of player who always looks forward and spots a Pass!

Good start to Fred’s United career. Tough to make any real judgement until our midfield takes shape, with Pogba and Matic to return. Hard not to be happy with that display. 👏🏻

Fred looks busy, eye for a pass. Love him already.

Fred’s work in midfield is brilliant. Closing down has being top notch