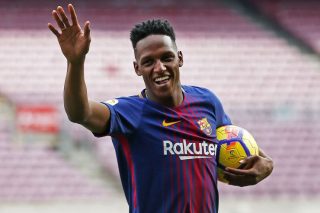 Barcelona defender Yerry Mina is closer to Manchester United than other linked clubs including Lyon and Everton, according to RMC Sport.

The Colombian arrived at Camp Nou last January after spending two years in Palmeiras. After struggling to settle in Catalonia, Mina had a good World Cup and even scored three goals.

Not bad for a centre-back.

While he’s not yet a starter at Barcelona – behind Gerard Pique and Samuel Umtiti in the pecking order – the La Liga champions have already rejected an offer worth €30 million from Lyon.

Meanwhile, at Old Trafford, it’s no secret that Jose Mourinho wants to sign a new centre-back. He’s signed two central defenders since becoming United boss in 2016, with both costing over £30 million but have still to cement their place in the team.

Mourinho’s next signing at centre-back must hit the ground running and Mina has already shown he struggles to settle. Then again, every transfer has its risks. The best managers at buying players are prepared to play that game.

Of course, Mina would offer better value than Harry Maguire and Toby Alderwerield. Check out our opinion piece on the Barcelona defender.