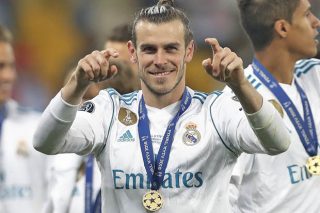 Manchester United transfer target Gareth Bale is happy at Real Madrid and has been challenged to fill the void left by Cristiano Ronaldo.

That’s according to new Real Madrid manager Julen Lopetegui, who insists Bale is not for sale ahead of the new season.

United vice-executive Ed Woodward remains a massive fan of the Wales superstar, though was unable to persuade Jose Mourinho to spend a chunk of his transfer kitty on the forward. The Reds boss wanted to bolster other key areas instead, but Woodward has yet to deliver on that front.

Mourinho is eager for reinforcements before the transfer window shuts and Bale’s apparent unrest in the Spanish capital was supposed to see United launch a bid.

That never happened and Lopetegui is now condiment the 29-year-old is staying put at the Santiago Bernabeu.

“He’s very, very happy,” Lopetegui said, as per the Daily Star. “He’s very happy to play at Real Madrid. He’s happy to be here, this is a fantastic opportunity for him to show his talent.”

Madrid sold Ronaldo to Juventus in a remarkable £100 million deal earlier this summer and Lopetegui is confident his side have enough quality to cope without the Portugal international.

“He’s with the team, he’s happy, he’s in line with our goals and it’s a start of a new exciting path for us that I’m looking forward to.

“We first recognise Cristiano as one of the most important players in the recent history of Real Madrid.

“He vocalised his desire to leave and the club gave him all the facilities to do so. We wish him all the luck in the world.

“And when it comes to our players, Bale and everyone else, we are completely convinced we have the players to move forward.

“Bale is a magnificent player with qualities and we are convinced he and everyone else can fill the void.”

Real Madrid take on Manchester United in the early hours of Friday morning.