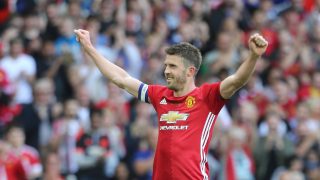 Carrick was given the number 16 shirt by Sir Alex Ferguson, which had previously been worn by Roy Keane, and he made his competitive debut for the club against Charlton Athletic at The Valley.

Over the next decade, Carrick became a vital component to Ferguson and was integral to a team that went on to win five Premier League titles, the Champions League, the World Club Championship and two League Cups.

Last Summer, Carrick was awarded with the honour of being named club captain following Wayne Rooney’s return to Everton. Unfortunately, his playing time was limited as he announced problems regarding his health. However, he returned in 2018 to play against Yeovil Town in the FA Cup.

All in all, he made 464 appearances for United, scoring 24 goals; deservedly cementing his status as a club legend.

Aptly described by Paul Scholes as a ‘Rolls-Royce’, Carrick brought a sense of calm and assurance to Utd’s play. In my opinion, he was the complete midfielder. He always knew the correct pass to play. In addition, he could defend, create goals and could shoot.

There is no doubt that Michael Carrick was grossly under-rated outside of Old Trafford. The fact that he was constantly overlooked by England is farcical. It is perhaps because of his no fuss attitude; Carrick just went out and got on with it. Having said that, he was highly valued by the Old Trafford faithful and squad – make no mistake about it.

Moreover, having Carrick as part of the coaching staff is a good move by Mourinho. It is important to have people around who understand what it means to be a part of such a great club.

Similarly, he has been there and done it. Michael Carrick knows what it takes to be successful and win trophies at the highest level. Having a man of such ilk about the training ground can only be a good thing for our youngsters.

To conclude, I will leave you with this quote from Gary Neville:

Scholes and Carrick together was peaceful. It was like going into a bar and hearing a piano playing. It’s relaxing.