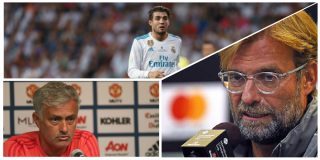 Manchester United and Liverpool are leading the race to sign Mateo Kovacic after the £71 million-rated midfielder told Real Madrid he wants to leave this summer, according to TeamTalk.

After making a name for himself at Dinamo Zagreb as one of the most exciting young talents in Europe, Kovacic was snapped up by Inter Milan in 2013 before sealing a big-money move to Real Madrid two years later.

However, the 24-year-old’s time at the Santiago Bernabeu has not gone to plan. He is behind Luka Modric, Casemiro and Toni Kroos in their midfield pecking order though unlikely as it sounds, new manager Julen Lopetegui may have a more prominent role for the Croatia international.

Last season, under Zinedine Zidane, Kovacic was restricted to just 10 La Liga starts. At either United or Liverpool, he would probably make at least double the number of appearances in the Premier League.

The English duo have been handed a boost as the report cites Diario AS in Spain as saying Kovacic has told team-mates and Lopetegui that he wants to leave for regular first-team football.

However, Madrid aren’t ready to let the Croatian leave on the cheap as the Spanish newspaper claims that the European champions are demanding around £71 million for Kovacic and they’d also need to sign a replacement before letting him leave.

It remains to be seen whether United or Liverpool will meet Madrid’s asking price, but the Scousers have already added Naby Keita and Fabinho, whereas we landed former Shakhtar Donetsk midfielder Fred.

Is this one worth believing? I’d love Kovacic at United and there will be no shortage of interest if he really forces a move out of Madrid.