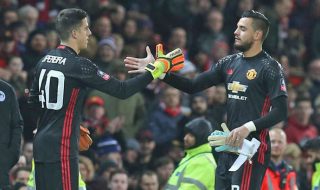 According to Record in Portugal, goalkeeper Joel Pereira will be loaned out to V. Setúbal until the end of the season.

They claim an agreement with Manchester United was struck last night and the player is expected to arrive this week.

The newspaper also states that it was manager Jose Mourinho himself who recommended the Joel, aged 22, to the Portuguese club.

Mourinho is from Setubal and wanted to make sure his young goalkeeper went to the right club in order to develop by gaining valuable first-team experience.

The boss has never hidden his admiration for the goalkeeper and believes he has a future at United.

Joel has been part of United’s tour of the United States, sharing the shot-stopping spotlight with new signing Lee Grant.

David de Gea will remain No.1 while Grant and Sergio Romero compete for second-choice.

We await confirmation from both clubs, but Joel has been expected to go out on loan all summer. We also expect some truth in these stories.