There are key players missing through injury and post-World Cup breaks, but that isn’t enough to excuse the worrying performances we’ve been subject to in the United States.

The two draws against Club America and San Jose Earthquakes were followed by a win on penalties versus AC Milan and a 4-1 hammering at the hands of Liverpool. It’s a pre-season tour and the lads look like they’ve been ordered to sit back, soak pressure and rarely attack. What’s the fun in that?

With Gareth Bale set to stay at Real Madrid and Toni Kroos available for selection, it will be intriguing to see whether Julen Lopetegui starts with the two United targets. Kroos was always an unlikely one, while Bale gave us false hope.

In the early hours of Friday morning, we take on Champions League winners Real Madrid. Here’s our predicted Manchester United XI for the game. 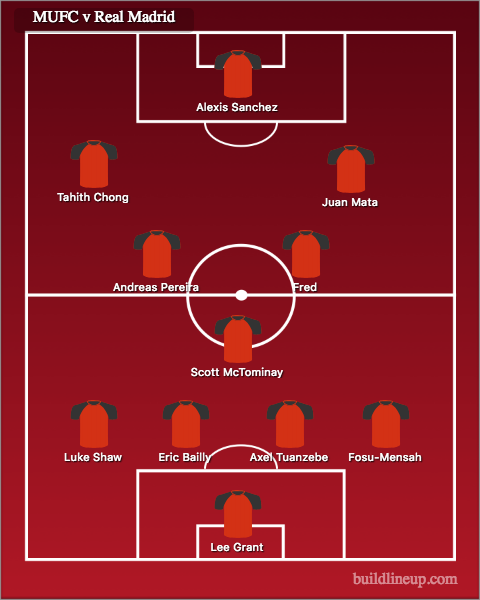 Joel Pereira is set to go out on loan in the coming days, so I fully expect Lee Grant to start in between the sticks. Mourinho was full of praise for Eric Bailly after playing against Liverpool, despite having an ankle injury. He should feature but the manager may not want to risk him with the number of injuries he already has to deal with, just over a week until the Premier League season begins. Chris Smalling hasn’t trained recently, too, meaning Axel Tuanzebe may need to be called upon for the 2018-19 campaign opener. Luke Shaw is certain to start at left-back, although the right-back role is up for grabs between Timothy Fosu-Mensah and wantaway Italy international Matteo Darmian.

In midfield, Scott McTominay is likely to act as the anchor in Nemanja Matic’s absence. Meanwhile, we fully expect Fred to get his first start in a United shirt, after featuring from the bench against Liverpool on Saturday. That leaves the next spot to either Andreas Pereira or Ander Herrera and, on the back of performance levels on tour, there should be the only one getting the nod.

Chong lit up United’s attack when he came on against Club America. The youngster has struggled to replicate that cameo, but I’d still stick with him against Real Madrid for the experience alone, or perhaps hand Angel Gomes the opportunity? Juan Mata and Alexis Sanchez, on the other hand, appear to have a great understanding of how to accommodate each other on the pitch.

Hopefully, when United get on the ball they use it efficiently rather than giving it back to Real Madrid time and time again.