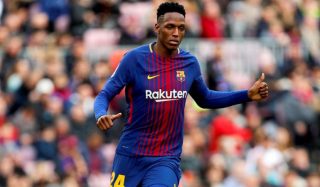 Since Sir Alex Ferguson left United and even in the years leading up to his retirement, the centre-back positions have been lacking somewhat for Manchester United.

While Phil Jones was hailed as the next Rio Ferdinand, others such as Marcos Rojo, Victor Lindelof and even Eric Bailly were brought in to bolster the defence and make the position their own. Jose Mourinho has done very well to make a solid defence out of, but let’s face it, the centre-backs are nowhere near good enough to win a league title.

What United need right now is someone who can come in and dominate the position and make it his own for years to come. Toby Alderweireld is seen by many as the answer and while he would be an excellent addition, we all know how difficult Daniel Levy is to negotiate with and to pay upwards of £60 million for a man who turns 30 next March and barely even played last season would not be the smartest business.

So, Yerry Mina comes into the equation. A player who, at the young age of 23 already looks close to the complete centre-back, while also showing the potential to get even better. A monster of a player standing at 6 ft 4, while being unbelievably comfortable on the ball, this young defender does not lack in confidence. Constantly looking for the pass into the midfield, he is seen as a very attacking defender. Not to mention 3 goals in 3 games for Colombia at the World Cup just passed.

This is the man Mourinho should be going after to bolster his defence. His confident presence on the ball will instil confidence into his teammates, especially whoever his partner in defence is. I t will also allow the midfield players to worry less about the defence and could be a contributing factor to unleashing Paul Pogba’s full potential. Will Mourinho see enough in Mina? Possibly not as he traditionally prefers the finished article and takes very few risks. But, you never know in football.