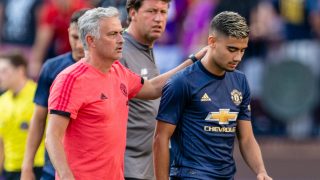 Andreas Pereira has revealed that Jose Mourinho has decided to play him in a deeper midfield role for Manchester United this season.

The 22-year-old has been one of United’s stand-out players on pre-season tour and appears ready to challenge for a place in Mourinho’s midfield for the upcoming campaign.

Pereira came through the ranks at United playing a variety of attacking midfield positions, either centrally or on the flank, but the academy graduate has been asked to play as a No.6 during the tour of the United States.

Speaking to United We Stand editor Andy Mitten for The National, Pereira said: “My best position now is as a number six.

“Mr Mourinho put me there and he can see things that others can’t see.

“I’m happy as a six and will continue trying my best there.”

Whether or not he gets much game time this coming season remains to be seen, but it looks positive for Pereira that he’s not being sent out on loan again this season.

Following two spells in La Liga with Granada and Valencia, Pereira has got a taste for first-team football and will want more at United this season.

There’s plenty of competition in front of Pereira though, making for an intriguing challenge as Ander Herrera and Scott McTominay sit on the fringes of the team.