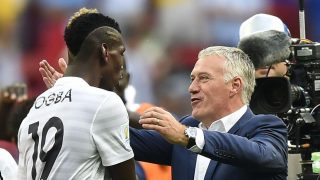 Paul Pogba served as a model to young stars like Kylian Mbappe in France’s World Cup-winning squad, Didier Deschamps has told kicker, as per ESPN.

Prior to the tournament, there were suggestions made that Pogba should be dropped from Deschamps’ starting line-up. It was claimed that they lacked the leaders required to fulfil their potential.

However, in Russia, the Manchester United midfielder shocked his critics and was central to the triumph.

“He didn’t surprise me. Paul is a nice guy, who listens, who has always thought of the team first. I have spoken a lot with him,” Deschamps said. “In our squad, he is — at 25 — in the middle in terms of age. For the youngsters in the team, he’s done it, he is almost a model of how things are done.

“He played the 2014 World Cup and Euro 2016. Before the tournament, it was bandied around a lot that we were lacking leaders and character. They all shaped up during the tournament.”

Pogba’s stature and reputation were given a boost in Russia and everyone at United hopes he can take that with him into the new season.

While manager Jose Mourinho has called upon his World Cup stars to cut their holidays short, it remains to be seen whether Pogba will take those orders. Should he return early it will be expected that he gives his team-mates a lift after what has been a poor pre-season tour.

The United dressing room also needs a few leaders to help Mourinho out. The Portuguese tactician will now expect Pogba to mature and lead the rest after his World Cup heroics.